The Main Business Opportunities in Iceland

Iceland has created quite a name for itself as a country filled with natural beauty, friendly people and incredible artists. What you might not necessarily know is that it’s also a nation with some fantastic business opportunities just waiting to be exploited.

In the past millennium, Iceland has transformed from a nation of people constantly fighting famine and natural disasters; to a prosperous country of high earners who not only live comfortably alongside volcanoes, they harness their energy for cheap electricity.

Iceland is a nation of highly educated, innovative thinkers. Its economy is like a prime fruit tree that will yield incredible returns for any who wish to offer some metaphorical water and sunshine.

It’s an exciting time to get involved in business in Iceland, but what are the main sectors? How easy is it to invest? Why should you invest in Iceland?

What Are Iceland’s Main Business Sectors? Like most developed nations, Iceland’s economy features a wide variety of sectors. Most of the industries you would find in countries like America, the United Kingdom and mainland Europe operate and thrive here.

There are, however, three main business sectors. These are the ones with the most infrastructure, competition and growth in recent years.

The three main business sectors in Iceland are; Tourism, Fisheries and Biotechnology. Few would have imagined this 50 years ago, but the tourism industry is one of the most profitable sectors in the Icelandic economy.

In the early 2000s, thanks to budget airlines, Iceland started becoming a popular destination for travellers of all kinds. Iceland offers a range of unique experiences and natural beauty unmatched elsewhere on earth, simply because there’s nowhere else on Earth like Iceland.

As social media progressed, more and more people began to ‘discover’ this tiny island nation in the North Atlantic through their news feeds. Over time, tourism became as profitable to Icelanders as the seas. Iceland may be one of the top places to get an Instagram shot everyone will be jealous of, but the nation has the ocean at its core. Due to the harsh natural conditions, the early settlers discovered that it’s difficult to cultivate crops in Icelandic soil. This meant that they were heavily reliant on the sea.

Since the early settlement, Icelanders have spent over 1000 years perfecting their fishing practices. Today, they have an incredibly well-maintained and regulated fishing industry.

Icelandic fisheries aren’t just fulfilling their potential when it comes to fishing methods; they are also leading the way when it comes to the processing of seafood. Companies like Marel use advanced robotics to sort products, and Valka uses hi-speed water jets to cut fish products and eliminate waste.

The Icelandic population has been relatively small and isolated for quite some time. Most Icelanders can trace their family history right back to the first settlers in the last 20 years, leading to geneticists tapping into elements of the human genome.

The research on the Icelandic population made some exciting discoveries about inherited genetic traits. It established the nation as a contender when it comes to medical innovation.

Today, Iceland has a bustling biotechnology industry, and its growth isn’t slowing any time soon. There are leaders in genetics research like Decode and pharmaceuticals, prosthetics, research and development, and e-health, all making incredible progress in Iceland. Icelanders have always had to be innovative. In the past, it was often just a matter of survival. Today, however, the cultural tendency to innovate and think outside the box comes more from an innate need Icelanders have to simply be better, be happier and make a more significant mark on the world’s stage.

Icelanders are typically what you would call ‘early adopters.’ They’re not afraid to take risks and aren’t generally resistant to change if it might mean a better bottom line for a business or investment. If you put all of this together, it’s easy to see why Iceland has a thriving startup industry.

Icelandic startups tend to have an extra edge on their foreign competitors because they are generally forced to think globally from day one. Long before covid, Icelandic startups were already benefiting from remote workers, utilising the booming gig economy and successfully attracting foreign investors.

How Easy is it For Foreign Investors to Invest in Iceland? It’s straightforward for foreigners to invest in Iceland. It’s not only welcomed; Icelandic companies are always looking for opportunities to work with those outside the land of fire and ice.

Icelandic businesses are often looking to attract the attention of foreign investors who might be able to give them access to an international market, or share valuable insights into an industry.

Who Are Iceland’s Main Trading Partners? Although Iceland was hit hard by the 2008 Global Financial Crisis, the contemporary portrait of the country should be one of a stable economy with very healthy international relations.

Because of its geographical location, Iceland is automatically suited to benefit from trade with mainland Europe, the United States and the United Kingdom.

About 53% of Iceland’s total trade is with the EU. The second-largest trading partner is the United Kingdom, followed by the United States, Norway, and China.

Over half of all Icelandic exports go to the EU (60%). These primarily consist of metals and metal products like Aluminium, livestock and animal products.

The Main Avenues for Foreign Investment in Iceland Foreign investment in Iceland follows basically the same channels that it would in any other developed nation. If you’re interested, you can follow the traditional method of investing in an already operating business, but you could also look at a few other options. As stated above, this can be as simple as bringing some capital to an already established business, but there are also opportunities to get in on the ground floor.

Leaders in the Icelandic economy have noted the success rate of Icelandic startups. As a result, an entire industry has developed around connecting them with potential investors.

There are initiatives like Startup Iceland and Start-Up Reykjavik that were created to mentor startups and eventually connect them with investors.

There are also companies like Crowberry Capital, whose business model is to connect investors with startups at the seed or early stage.

Open a Subsidiary of Your Business in Iceland If you already have an established business and would like to invest in Iceland, another option could be to open a branch of your company in a limited capacity in Iceland.

You can also open an independent company, also known as a subsidiary in Iceland. It’s entirely feasible as long as the operations of your business fall within the company law provisions of the EU/EEA.

You can find out more about how to open a subsidiary of your business here. This is possibly the most ‘old school’ method of investing in Iceland, and it can be just as profitable as all the others.

The Icelandic stock market operates as the NASDAQ, or more specifically the NASDAQ – OMX.

It operates over 28 global markets and works closely with other nordic markets. It shares the same infrastructure as the NASDAQ in Helsinki (Finland), Stockholm (Sweden) and Copenhagen (Denmark).

To invest in the NASDAQ – OMX it’s a simple process of engaging the services of a broker and buying shares in a publicly listed Icelandic company. The complete list of Icelandic companies on the stock exchange can be found here.

Why Should You Invest in Iceland? 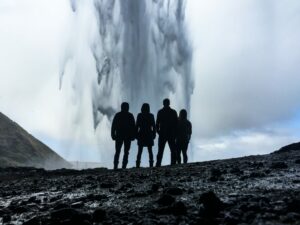 The story of Iceland’s economy in the last 100 years is enough to make anyone realise that this country is a horse you should probably bet some money on.

At the start of the 20th century, Iceland was one of the poorest countries in Europe. After the Second World War, the country’s economic position began to gain momentum. Today, Iceland is one of the highest income nations on the planet.

The trajectory of progress in Iceland will continue, and to speak frankly, you would be a fool to not get on this train before it becomes a high-speed bullet.

How Swapp Agency Can Help You

If you’re looking to invest in Iceland or take advantage of the business opportunities available here and understand Icelandic business culture, Swapp Agency should be your first port of call.

Swapp Agency was founded to connect some of the incredible talent available in Iceland with businesses who wish to capitalise on their skills. We can assist in connecting you with contractors, employees, oversee entire portions of a project, and so much more to ease the burden on your exciting ventures.

Iceland is currently experiencing a boom in its gig economy, and Swapp Agency is at the forefront of access to some of the most skilled gig workers available.

You can also contact Swapp Agency for more information or to learn about how they can connect you with Icelandic businesses for your project or venture.

We have a great ear to the ground on the Icelandic economy and can also assist everything from permits and visas to acting as an Employer of Record. When it comes to business, figures talk. Iceland has consistently provided those figures over the last century. Its exponential rate of success in its primary industries illustrates how Iceland is not only a country to watch but also a country to get involved with.

Icelanders have shown the history books that they aren’t people who bow out silently. Instead, they choose to innovate, create, learn and educate to establish themselves as the overwhelming underdogs of industry.

Do yourself a favour, get involved in some Icelandic business.